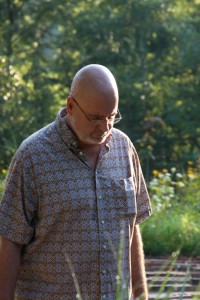 My first encounter with the topic of the Trager Approach was as an instructor at a local massage school. I had booked a person who had experience with the technique, as a guest speaker for one of my classes. Up to this point, I had considered Trager as just another massage technique yet I was curious, as I had never seen it in practice before. As she “played” with the movements, it became obvious to me that I had been wrong. Even though this was bodywork, it was nothing like massage, as I knew it to be. Through this person, I met my first Trager practitioner and my life began to change. At this point, I should give you a little of my past medical history. I suffer from chronic low back pain due to a disk injury 30 years ago and a subsequent ineffective surgical attempt. This had left me with stiff movements and sporadic issues at various points along my spine. Basically, it hurt to move.

I went to my first session with Roger Hughes, a Trager practitioner. I had no expectations; just a deep curiosity about what was about to happen. I had tried massage, obviously, over the years to no noticeable improvement, chiropractic regularly to alleviate pain, and various pain meds to make life tolerable. He first introduced me to movement potential: what was softer, lighter, how to “experience” my limitations. This was new to me; life had been lived so as to minimize pain. Movement…. this was relatively an alien concept to me. With his leading me through what I would later come to know as Mentastics, the tissue that I had been guarding actually began to soften! This fascinated me; it seemed such a simple concept.

Then the table work began. Introducing movement into my stiff body, now this was going to be a challenge for Roger, or so I thought. The rule of thumb in the massage world is that once you become a massage therapist, the act of just lying there and receiving work is over. As a massage therapist, one tends to stay awake just enough to analyze what is happening. . you may actually experience a new stroke that you want to “borrow” for future sessions. I was wrong about the challenge for Roger. With minimal effort he started moving my body, jostling tissue, and lightly shaking areas that seemed stuck. My tissue responded and melted immediately. Once again, I could feel years of guarding and protecting, melting away. This seemingly simple exposure was the “hook” needed to get me involved in the Trager experience.

I began my education in the Trager approach in the summer of 2009. The level one class showed me just how different Trager is from massage. I actually find, at times, that my massage background gets in the way of my Trager work. Trager is about reeducating the tissue to new possibilities by bringing back the forgotten sensations of lightness and ease. Massage is more “forceful”, relying on stroking and kneading to break down adhesions and holding patterns. Trager work was going to require a child like curiosity in my approach to my client’s tissue. Actually, approaching a client as if you had never seen a limb, a back, or a shoulder, works quite well. Just letting my hands play with curiosity and feeling what was lighter began to change my approach to all of my clients.

Mentastics, mental gymnastics, I was sure was to be the greatest challenge of my newfound path. The fact that was impossible to ignore was that I was stiff…period! Now these Trager people wanted me to roll around on the floor, imagine the sensation of walking on a sandy beach, having a tail that could erase my footprints in the aforementioned sand…uh huh…right! With reassurance from the instructors I began “working” my body with movements that I hadn’t done since childhood. What amazed me was that my stiff, battle scarred body actually began to remember these movements!! I kept recalling the Monty Python skit of the Ministry of Silly Walks. Hey, if John Clease could do it, so could I… and I did! These exercises will eventually be the lessons that I will guide my client’s in.

Trager takes time to learn, a dedication to be playful and childlike. I’m two weeks shy of the final required step before becoming a full-fledged Trager practitioner. Level 3. So this one should be BIG. I’m thinking it’s time to take my education on the road. So, it’s off to Switzerland. Mentastics in the Alps! Trager and cheese. So far the journey has been one of self-discovery and a new awareness of how the body really works (and that my body still works).

I was tired of the day to day job that would lead no where, working from paycheck to paycheck. I wanted a career in the medical field where I could help people and feel good about what I’m doing. [At WellSpring] the instructors are knowledgeable and they really do care. They want you to be successful.