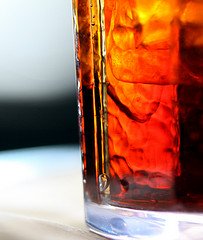 Researchers have already found that drinking diet soda can actually be bad for your weight-loss efforts, and now there’s another reason to avoid the fake-sugar cola: stroke risk. According to research presented at the American Stroke Association’s International Stroke Conference 2011, those who drink diet soda instead of the sugar variety have a much higher risk of vascular events compared to those who don’t drink the carbonated stuff.

Researchers looked at 2,564 people and found that people who drank diet soda daily had a 61 percent higher risk of vascular events than those who didn’t drink it. Researchers accounted for participants’ age, sex, race or ethnicity, smoking status, exercise, alcohol consumption and daily caloric intake in the study. Scientists didn’t record the types of diet and regular drinks consumed, so research is needed on the possible role variations among brands or changes over time in coloring and sweeteners might have played.

It’s yet another reason to hydrate yourself with good ol’ plain H2O!
Photo courtesy of Dawn Huczek on Flickr.

What I love the most about being a massage therapist, is that nearly every person who comes to see me is there because they genuinely want to be. In my previous career of being a real estate agent, there was so much tension and stress on the job. In massage therapy there is a lack of stress and a peace that overcomes both client and therapist.